Last week I talked about Craftsman architecture, specifically, the characteristics of Prairie style. I figure, since I’m on a role, I should write a little about Frank Lloyd Wright. He was, after all, integral to the movement and the overall establishment of the aesthetic. 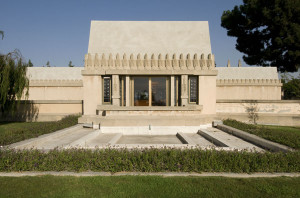 that represented a dramatic shift in design from the traditional houses of the day. Characterized by dramatic horizontal lines and masses, the Prairie buildings that emerged in the first decade of the twentieth century evoke the expansive Midwestern landscape. The buildings reflect an all-encompassing philosophy that Wright termed “Organic Architecture.” By this Wright meant that architecture should be suited to its environment and be a product of its place, purpose and time. First developed in 1894, when Wright was establishing his practice in Chicago, this philosophy of design would inform his entire career.

Today, Wright’s name is heavily associated with the movement away from ornate European styles and has become symbolic of classic American architecture. Most recently, Wright’s Holly Hock house, located on a majestic hilltop in Los Feliz, CA, was re-opened after undergoing nearly five years of restoration and repairs. You can go check it out for yourself or take an online tour of its stunning interiors!