Hey everyone! I discovered some more interesting facts about our new home. Power’s granddaughter (Edyth Scott Powers), as it turns out, was in contact with the woman that we bought the house from – we’ll refer to her as crazy pants or CP from now on (more on her in later posts). CP gave us a letter from Edyth, and enclosed were eight old black and white photos. 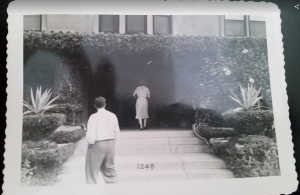 We hoped that we would be able to get some clues as to the original look of the house; unfortunately most of the photos were too small to see much. The front of the house was also heavily covered with ivy, as you can see, adding to the challenge. This photo does reveal, however, that the two big urns planted with agaves were original and, if you look closely, you can see the shape of the tile roof, which we know was made of tin because it still exists in one small area in the back of the house.

That’s all I discovered so far, keep reading for the latest updates and if there’s an interior design concept that you’re curious about don’t hesitate to contact me! 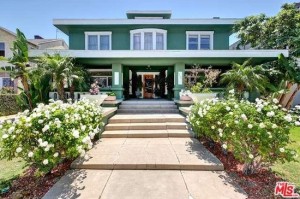 Here it is! My husband and I own our first home together. Built in 1910 and technically prairie style (but not unlike the many craftsman houses in the area) it was designed by engineer J. Clyde Power serving as his family’s main residence for 25 years. With 4,000 square feet of well-crafted, grandiose, turn of the last century architecture it is in remarkably good condition for it’s age and Dennis and I are excited to restore it to its original glory. Its going to be quit the adventure getting it there, the kitchen and bathrooms consist of what those of us in preservation generally refer to as “inappropriate alterations” and the exterior is a whole another story…. We know that the roof was changed from metal tiles to asphalt shingles, a garland trim was removed from all but one small area in the back, and stucco was slathered over almost everything, but other additions and details remain a mystery.

We are looking forward to digging up more information about the history of the house and taking on as many restorative projects as possible. I’m Jeremy Irvine, an interior designer currently taking on my own home in addition to my client’s homes. Follow my blog for updates on my home’s historical past and the various restorative projects we embark on.